The Lelo Pino has one of the tackiest promotional campaigns I have seen in a long time.

Before the Pino was revealed a promotional site came up hailing it as the first toy that was “exclusively for bankers”.

People could enter to win a custom engraved Pino (though if you weren’t a banker then you were chastised for doing so) and press releases were made:

The new PINO™ will be the first sex toy in history that can satisfy the hedonistic sexual cravings and excesses exhibited by members of the financial world.”

Skip forward to its release and the Pino is revealed as a vibrating couples’ ring (a cock ring)—complete with cuff-links and a money clip with the expression “Always Be Closing” on it.

The advertising for the Pino took an increasingly more  ‘exclusive’ turn too, as it suddenly presented itself as a toy for testosterone driven, male bankers. 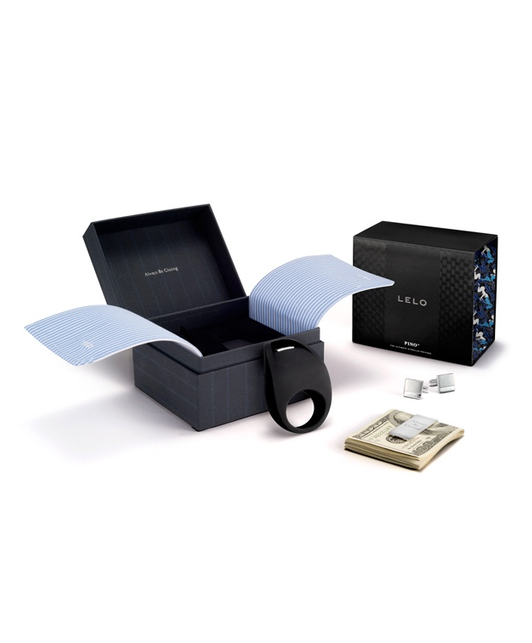 “For most of us, sex is one of the most wonderful, pleasurable experiences in our lives.

In the male-dominated, testosterone-drenched context of banking, it’s an obsession, and that perhaps explains the demands LELO receives and delivery to financial institutions.

Bankers are both proud of their sex lives but also want to make sure they’re doing it right.

PINO is kind of an external consultant in that respect, and as a sex-positive, inclusive brand – LELO creating this product 100% serves a demanding group.”

“Its vibrating motor brings enhanced pleasure for her, “while ensuring the man will always close the deal with his partner,” the company says.”

Needless to say these quotes from Xbiz, coupled with the Pino’s South Park-esque advert, left a lot of customers and reviewers incredibly unhappy and rightly so.

Not only was Lelo’s ad campaign highly contradictory (a sex-positive, inclusive toy that’s exclusively for male bankers) but it was also sexist, full of stereotypes, and downright insulting.

If it was meant to be a joke then it was in poor taste and if it wasn’t a joke, well, I don’t know why anyone thought it was a good idea.

However the ad campaign for a toy is not always reflective of the toy itself and me a Mr. Peaches are a sucker for cock rings so, naturally, I had to give the Lelo Pino a try.

I contacted the lovely people over at Belle de Soir and requested the Pino in exchange for an honest review and they kindly provided me with one.

Approaching things with an open mind and an eagerness to test the product I tried to detach myself from Lelo’s insulting ad campaign and, instead, chose to judge the toy on its effectiveness and use.

And, to be completely honest with you, I’m glad I did. The Lelo Pino is probably one of the best vibrating cock rings I’ve tried and, surprisingly, truly earns its title of “couples’ ring”.

The Lelo Pino is a vibrating cock ring designed with couples in mind. The ring itself comes in a very fancy box that is good for gift-giving and for special occasions. The box is covered in an outer sleeve which depicts a man and woman in the throes of passion in it’s inner section.

Meanwhile the main box is sturdy and suitable for storage. Inside there is a sleeve with two Lelo cufflinks included and a bank clip (as mentioned above) the box also has “Always Be Closing” engraved into it. 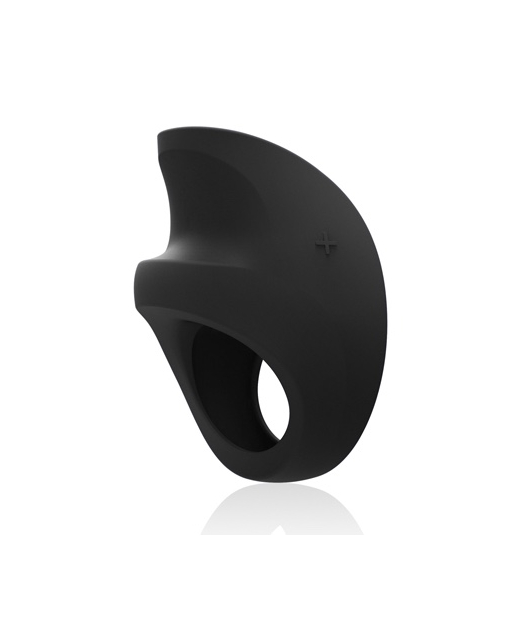 “Always Be Closing” is etched into the inside of the box.

Silly as this all seems it might make the Pino a bit more special as a gift for bankers (of all genders) and add a little bit of playful fun to the unveiling of the toy.

Mr. Peaches also admitted to me that he actually found the packaging quite nice, despite knowing it was a blatant gimmick.

On a more practical note the Lelo Pino comes with a storage bag, a sachet of lube, and a warranty card for the toy.

As with all Lelo products the Pino comes with a 1 year warranty and a 10 year quality guarantee, which is very useful for dealing with manufacturing faults. The Pino, itself, is a rather hefty-looking couples’ ring that kind of reminds me of a clog.

The vibrating section is in the bulky area which curves distinctly and the ring has raised edges and a thin mid-section.

The Pino is very similar to a clog in shape.

The cock-ring section of the Lelo Pino is relatively stretchy but not stretchy enough to be used as a cock-and-ball ring. This is a bit of a shame but makes sense considering that you can shift the Pino depending on what position you’re engaging in.

This allows for some diversity during use.

The two ways to use the Pino. 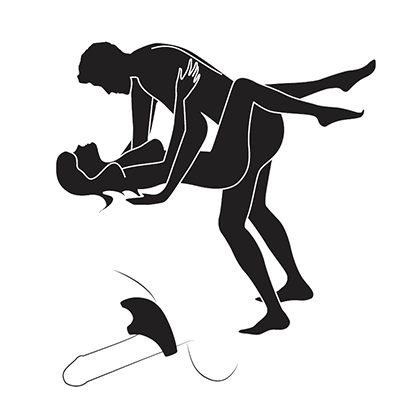 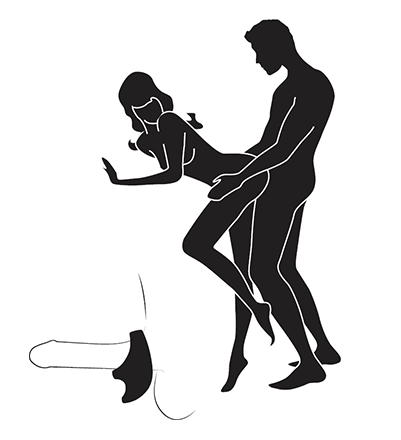 The Pino is made of Lelo’s buttery smooth silicone and it does give the toy a very luxurious feeling, however there are some very poorly trimmed seams in places which do detract from the quality of this toy a little bit.

From a company that can and has pulled off elegant seamless silicone before this did leave me a bit disappointed—especially seeing as this toy was clearly going full-throttle with the luxury look.

The Lelo Pino is clearly going for the luxury look–right down to its packaging.

One of the biggest benefits of the Lelo Pino are its vibrations, and these are actually pretty decent. The Lelo Pino has 10 different stimulation modes and incremental speeds. All of this is controlled through the + and – buttons.

This can be a bit clunky at first but once you get used to it it’s pretty straightforward. The vibrations from the Pino are a combination of buzz and depth, which works quite well.

This combination is quite typical for Lelo, however I would say that the Lelo Pino is slightly buzzier than something like the Lelo Mona Wave.

Despite this the Lelo Pino does not lose any of its depth and can stimulate the clitoris to great effect.

Before using this toy I was in two minds as to whether or not it would work for us.

However it didn’t take long for me to realize that the Lelo Pino was nothing like its cheaper counterparts.

The Pino’s shape and size actually allows it to keep pretty good contact with the vulva at most points and (upon fullest impact) the shape of the Pino actually cups around the vulva in such a way that allows for the vibrations to be incredibly prominent.

This area is also hollow in places, which means that it’s not too hard or rigid when it makes contact.

I actually found myself reaching climax due to these vibrations and they were incredibly stimulating. This is a pretty big deal for me because, while I love PiV intercourse I very rarely reach orgasm during.

As such the Pino managed to thoroughly impress me with its capabilities—especially its ability to keep contact unlike most vibrating cock rings.

Mr. Peaches also found that the Pino was enjoyable but it wasn’t a game-changer for him. In Mr. Peaches’ case he found the vibrations pleasant but they didn’t make any noticeable difference during orgasm. The ring also lacked the thickness or tightness to enhance his orgasm.

However the Pino did allow him to last noticeably longer (allowing me to enjoy the vibrations over an increased time). This, to my mind, is an advantage—especially considering the time gap when it comes to males and females to get aroused and reach orgasm.

The Pino considers what both the user and their partner needs and attempts to combine them into one product.

Because of this I really do believe that this toy gets top marks as a couples’ toy, and this is why I think it truly earns the title “couples’ ring” instead of simply “cock ring”.

Alas, no toy is perfect and (marketing aside) this toy does have a few flaws that need to be mentioned.

Mr. Peaches’ biggest problem with the Lelo Pino is that the cock ring section has a shallow internal section instead of being thick and chunky all the way around.

For him this makes it awkward (read: near impossible) to apply without lubricating and means that it provides less stimulation. He find this particularly frustrating because, to him, this was “almost a near-perfect cock ring for couples” and he felt this detracted from that.

Mr. Peaches found the ring section to be frustrating to apply due to its dipping mid-section.

Both of us also found that the buttons for the Pino weren’t very prominent and could be fiddly to locate. If they were more defined then we would have been happier.

While the Lelo Pino is waterproof Mr. Peaches found that the Pino took a bit more effort to clean than a normal cock ring. I protested this point, saying that the Pino had no horrendous nooks or crannies and that it was on par with most toys when it comes to maintenance.

However Mr. Peaches pointed out that, while this may be true, it is still more hassle than a normal cock ring.

So if you’re main toys so far have been cock rings then expect the Pino to require a bit more cleaning effort.

However, if you’re used to cleaning a broad array of sex toys then the Pino should be easy to clean.

Another thing that’s worth noting is that, while the Lelo Pino felt great during front-facing penetration, I didn’t get a similar amount of pleasure from using it during penetration from behind.

Mr. Peaches also found the Pino to be a bit top-heavy at first, so this might be a toy that you need to adjust to.

One of my personal gripes with the Pino is that it is very clearly trying to cater to cis-gendered, heterosexual couples.

There’s no getting around this—the Pino is targeting M/F couples near-exclusively and I’m not sure how I feel about that.

The Lelo Pino had a terrible advertising campaign, it’s true. But look beyond that and you’re left with an effective, enjoyable, and well-designed product that attempts to satisfy couples and does a pretty good job at it.

While it’s not perfect the Lelo Pino is probably the most effective vibrating couples’ ring that I’ve ever used (and perhaps one of the few that is actually worthy of the title).

If you’re a heterosexual couple hoping to share a toy then the Lelo Pino is a great way to explore new sensations together and I can certainly recommend it.