I’ll be completely honest; thrusting has never been my favourite sensation in the world. When it comes to my insertable toys I basically never thrust them and, while thrusting is nice during sex, it’s not something that’s ever been able to tip me over the edge.

Given all this it might seem odd that I was drawn to the Stronic Eins—a toy that ‘pulsates’ instead of vibrating in order to cause a distinctive thrusting sensation—but I couldn’t help but be tempted. In the sex toy industry it’s still so rare to encounter a toy that is truly innovative, yet the line of Stronic vibrators definitely tick this box.

What Is The Fun Factory Stronic Eins Pulsator? 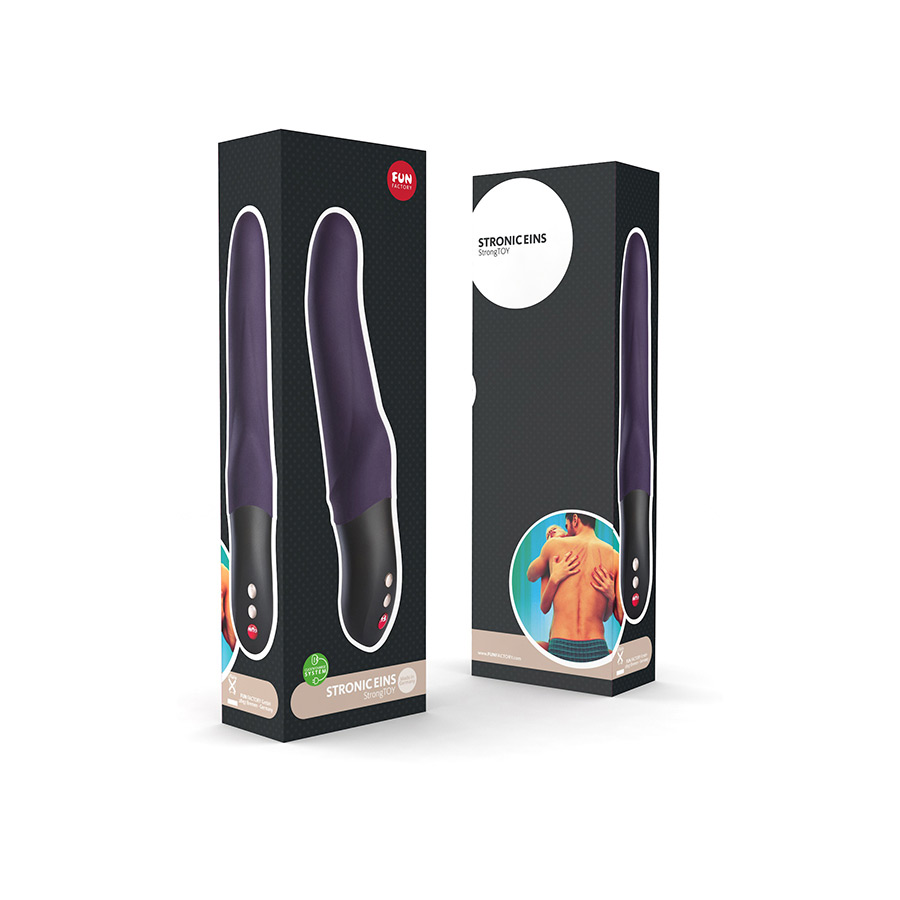 The Stronic Eins is made out of silicone and ABS plastic, so it’s phthalate-free and body-safe. It comes with a travel lock, is USB rechargeable (via a magnetic clip) and is completely submersible, which is a godsend when it comes to cleaning. All of these benefits are things that you would expect from a luxury vibrator, but it’s still nice that the Stronic Eins can tick all the boxes (well, all except having a storage bag included). 10 different rhythms are included in the Stronic Eins—including a series of constant modes and some patterns. One of the patterns even mimics the clippity-clop of a horse, which is adorable.

While most of the Stronic Eins is quite firm, the very tip of this toy actually has some give to it and is slightly bendable, this helps during insertion and makes the thrusting mode a lot more forgiving then if the whole toy would have been rigid. Three buttons control the Stronic Eins and it only takes 0.5 seconds to turn on and off. This makes the Stronic Eins incredibly easy to use, so there’s little worry about the buttons killing the mood. Adding to this the handle is easy to grip and stays in a nice position during use.

The Stronic Eins claims to be hands-free but, honestly, I haven’t had much success with this (and neither have other reviewers). Leaving it to its own devices the Eins will either delve too deep or (more likely) thrust its way back out of the vagina, however applying too much pressure to the handle hinders the thrusting action of this toy. Subsequently using the Eins is a bit of a balancing act—as you find the right combination between secure grip and light touch—however once you’ve found the balance it’s fairly easy to maintain. As for the sensations, the Stronic Eins was phenominal.

I have to admit, when I first used this toy the sensations felt incredibly weird. While it doesn’t, as Fun Factory claims, mimic natural thrusting, this toy certainly does thrust during use, and its rapid back-and-fourth feels like having a Shake Weight in your vagina without needing to put in any effort for the motions. The magnet sways back and forth—providing a weighted plunging sensation which is accompanied with a rumbling sense of depth that resonated deep within the area. It’s really overwhelming and quite prominent during use, but quickly becomes enjoyable (addictive, even).

Some reviewers have said that the Eins did not give them much in the way of G-spot stimulation, but I’ve almost always able to make it hit the spot and it has always been satisfying when I’ve done so. 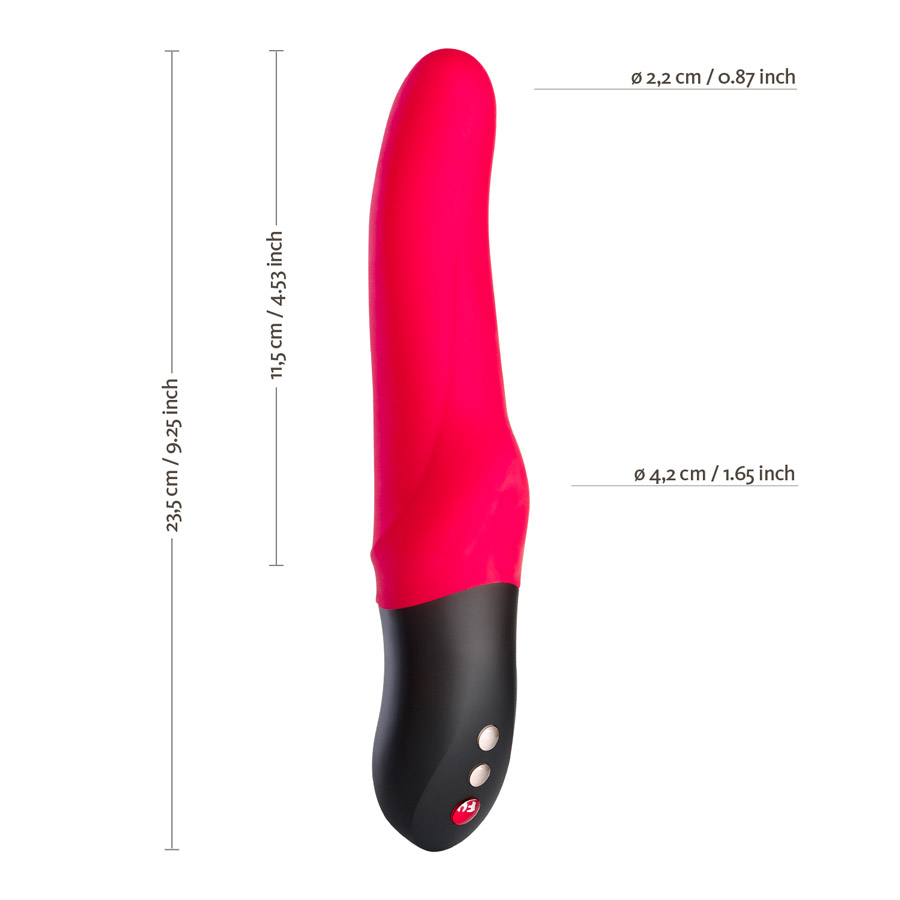 The Stronic Eins has had a fun side-effect too. Ever since I’ve been using it I’ve come to enjoy thrusting sensations much more. Sure they were nice before, but now I’m coming to appreciate the sensation much more, and it’s something I even deeply crave from time-to-time.

Beautiful orgasms aside, the Stronic Eins is not a perfect toy.

Because the Eins can’t be used hands-free and requires a light touch it can be quite awkward to dual-wield with the Eins (as is often necessary). In fact it can sometimes be quite a fumble to keep everything in place and running at optimal efficiency. Some people have found that having a partner hold the Eins helps but Mr. Peaches and I found that neither of us were fans of him using the Stronic Eins on me. It will work for some but not others.

The Stronic Eins also offers little-to-no clitoral stimulation (despite what it may claim) so if you want this toy for clitoral play then you’re out of luck.

Also, while the Stronic Eins is very quiet it’s still not silent (it has a gentle whooshing whirr to it). Still I do think that this toy could be used discreetly.

But by far the biggest downside to the Stronic Eins is its silicone. It’s horrible. When I first got the Stronic Eins I thought I had a defective version because the silicone felt so bad—it’s very draggy, unrefined and even grainy in places. Because of this I needed a lot of lube with the Eins first time around and it still felt like I had sandpapered my insides. The pulsations themselves were divine, but the silicone felt like gravel internally.

Asking around I found that this is normal for Fun Factory and that some people are simply more sensitive to it than others. But holy cow does this suck, especially for a toy that costs £127.99. Thankfully there is a really easy solution to this. Sticking a condom on the Stronic Eins instantly alleviates the silicone issue and allows this toy to be used without abrasion or irritation.

Considering how cheap bulk buying condoms can be nowadays this is a small price to pay for me to enjoy the delectable sensations that the Eins provides. Still with such a steep price tag this is a definite downside.

Overall I utterly adore the Stronic Eins. The sensations it provides are truly unique and they work well for anyone who likes thrusting and depth of sensation. I’m not sure that this toy would be the best beginner’s product, but for someone looking for a new sensation to add to their toy box or someone who knows they love thrusting motions (or simply want to learn to love them) I think that the Stronic Eins is a really valuable asset.

Bringing thumping quivers into the bedroom, this phenomenal pulsator can provide breath-taking pleasure and is bound to make a great present for the right user.